Case Study: Tony – “SIGNAL made me feel I was taking control of my life”

SIGNAL is currently being used by over 40 organisations in the North East of England, Sheffield and Edinburgh.

Its capacity to collect information from conversations with individuals and households generates accumulated data in the form of infographics and geo-referenced maps that present a powerful tool to organisations and commissioning bodies who wish to better understand how to target resources to generate social outcomes.

However, its fundamental significance lies in how it puts the individual or household at the very heart of the process; how it gives them agency and power to identify their own priorities and, together with their support organisations, co-produce an action plan to overcome their barriers and to plan for the future.

This is the first in a series of ‘case studies’ in which we will share some of the personal experiences to illustrate the different contexts in which SIGNAL is being deployed and the impact it is having.

Tony is 39 years old. He was born in the North East of England to an Italian father and a mother from England. He has worked in the hospitality sector and spent 3 months in Ghana doing voluntary work. 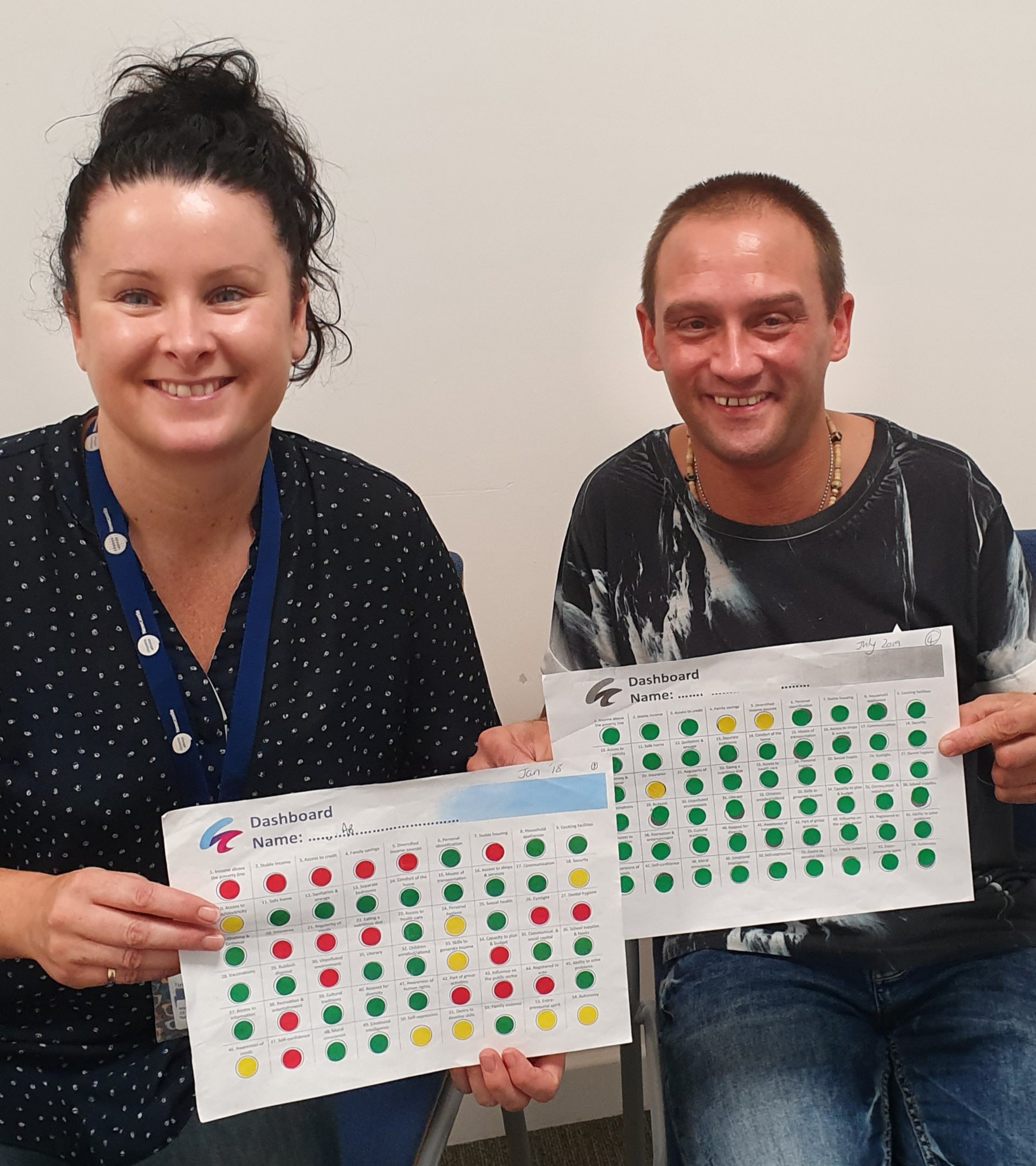 Tony is a shy man, but he is also open and warm. He was happy to meet me and enthusiastic to share his experience. Both he and Gayle, his advisor at Citizens Advice Newcastle (CAN), were clear that I would not have recognised the man who first came to CAN in January 2018

In his early 30s, Tony experienced the onset of a neurological condition which he describes as a hidden disability. He spent some years being in denial about it.  It started to have a dramatic effect on his life.  He found that he could no longer work, and this triggered a downward spiral in which he lost his confidence as he became more and more ill.

Back in January 2018, Tony was, in his own words, ‘at rock bottom and had given up hope’. He felt he had no control over his life.  His benefits had become tangled and he had been accused (wrongly) of benefit fraud.  He was living with a friend but was unable to contribute to the household budget. His father had moved out of Newcastle but, without money, Tony was unable to visit him. Tony stopped telling him how bad things had become for fear of worrying him. 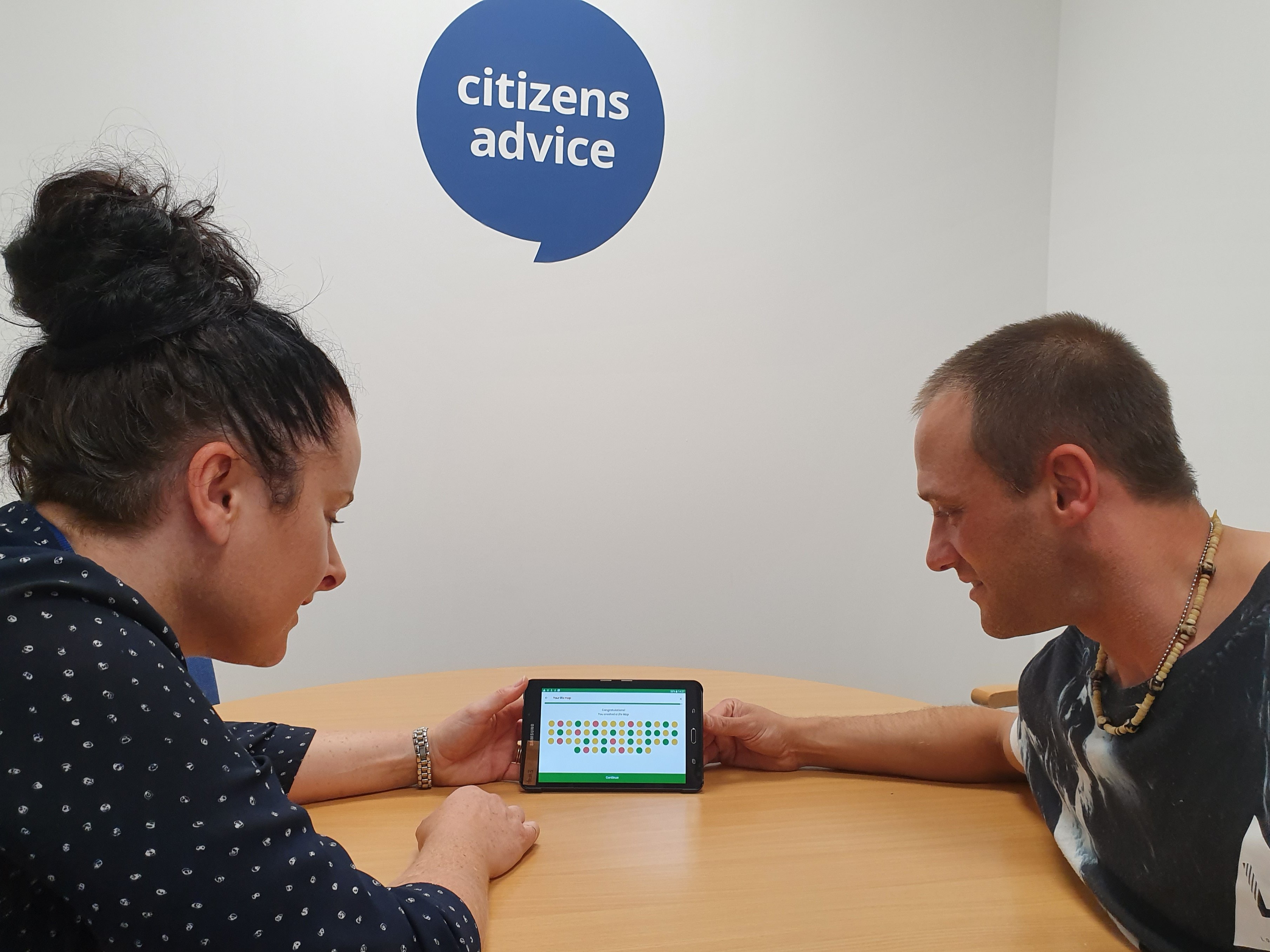 Gayle, a highly skilled and experienced advisor had, back in Jan 2018, only been doing the job for 9 months and both she and Tony described that they felt tense at their first meeting, Tony because he was in despair and Gayle because she was faced with what felt like an impossible task.

Gayle introduced SIGNAL and Tony completed the survey. This was the first time that Gayle had used it on a real live client, so for each of them, it was uncharted territory. Speaking to them now, it is clear, looking back, that they both benefited from the experience because the process of engaging with the questions began to ‘calm things down’; it allowed them ‘to take a breather’. And when Tony completed the survey and both he and Gayle were able to contemplate the dashboard with its red (extreme deficit), amber (potentially at risk) and green (everything is OK) responses, patterns began to emerge.

There were a lot of reds on the dashboard – 18 to be precise (these included all the financial indicators, as well as housing, insurance, health, self-confidence and social networking).  As Gayle described it, in the face of such apparently overwhelming multi-layered problems they went into a near-panic mode in which ‘the first reaction was to grab onto something we could do’.  But seeing his situation laid out before him, on a dashboard of red, amber and green dots, had an effect on Tony.  He started to reflect on his situation. It opened up a conversation which, crucially, didn’t just focus on the reds but actually started with an indicator that was green: vaccinations.  It stood out - an unlikely green – and it prompted a conversation. Tony explained that he had a full set of vaccinations because a few years previously he was doing overseas voluntary work in Ghana. This was the seminal moment: the unexpected nugget that nudged Tony into a positive frame of mind and recalibrated the relationship between him and Gayle.

It was a long road – Gayle had to support Tony through a grinding benefits appeals process which ultimately re-instated his benefits and secured a disability benefit. No doubt that would have happened anyway, but, crucially, SIGNAL helped to make the process one of transformation and not just transaction.  Gayle observed that engaging with SIGNAL showed her and Tony things they might never have seen and might never have had the opportunity to talk about.  She said that she could see it ‘putting the fight back into him’ as he visibly lifted when describing his experiences in Ghana.

Tony told me about how, seeing the reds and yellows on his dashboard, he felt motivated to find ways of turning them to green.  Fixing the benefits situation was absolutely crucial; it enabled Tony to secure a tenancy in rented accommodation and that gave him the security he needed to dare to think about what might happen next.  Once the financial crisis had stabilised, SIGNAL helped him take control of his situation and to think about his future; to make decisions about what were his priorities and what were his goals; to break things down into manageable chunks and to agree to strategies with Gayle to achieve his goals.  Furthermore, he could determine which areas he could do for himself and which he needed help with.

I am describing work in progress.  Six months after Tony’s first meeting, Gayle asked him to take the survey again.  A number of reds had turned to yellow and green; Tony could see that he was making progress.  Six months later, Tony contacted Gayle and said that he would like to take the survey for a third time because he had been working on his action plan and wanted to see what effect that would have on his dashboard.  He had reduced the number of reds to just one.

And then, at the beginning of July 2019, Tony asked Gayle if he could repeat the survey for the fourth time.  To our certain knowledge, Tony is the first person in the UK to have completed the fourth survey.  When he arrived, he was struggling to speak because his mouth was swollen. He reached into his bag and pulled out a pair of glasses and with a flourish put them on. His muffled speech was because he’d had 6 teeth fixed at the dentist (Tony told me that until recently he’d been ‘petrified’ of the dentist). He’d come back in because he wanted to update his dashboard to show that his poor eyesight and dental hygiene indicators had turned green.

To date, he has 51 greens and 3 yellows on his dashboard (which he and Gayle describe as work in progress rather than ‘at risk’).  These are ‘household savings’ (Tony is overpaying his rent so that he can build up a buffer), ‘diversified sources of income’ (he is following a plan to get back into employment) and ‘insurance’(he’s working with Gayle to research affordable options).  There are no reds.

Tony is back in touch with his father:  he can afford to visit him frequently and they have proper ‘family nights’ on a regular basis.  At the time of writing, he is looking forward to starting as a volunteer to do horticultural work at a charity in Newcastle